This is a talk that Elder Mark E. Petersen gave who was a member of the Quorum of the Twelve at the time.

In doing Scout work you are doing Church work. It is just as important Church work as if you were in some other phase of the Church program, because the work you do in scouting is work done for the salvation of the souls of boys in the kingdom of God.

I have said many times that this Church has only one objective and that is to save souls. Each part of the program of the Church has been instituted with that thought in mind. We have not brought into the Church any phase of the program that is not intended to help save souls. The Scout program has been brought into the Church as a part of the official program of the Church as one means of more effectively saving the souls of our boys, building faith and character in their hearts, helping them to love God, and to do the things that they should do in building spirituality.

One of the important parables the Lord has given us is found inSection 101 of the Doctrine of Covenants:

44: A certain nobleman had a spot of land, very choice; and he said unto his servants: Go ye unto my vineyard, even upon this very choice piece of land, and plant twelve olive trees;
45: And set watchmen round about them, and build a tower, that one may overlook the land round about, to be a watchman upon the tower, that mine olive trees may not be broken down when the enemy shall come to spoil and take upon themselves the fruit of my vineyard.
46: Now, the servants of the nobleman went and did as their lord commanded them, and planted the olive trees, and built a hedge round about, and set watchmen, and began to build a tower.
47: And while they were yet laying the foundation thereof, they began to say among themselves: And what need hath my lord of this tower?
48: And consulted for a long time, saying among themselves: What need hath my lord of this tower, seeing this is a time of peace?
49: Might not this money be given to the exchangers? For there is no need of these things.
50: And while they were at variance one with another they became very slothful, and they hearkened not unto the commandments of their lord.
51: And the enemy came by night, and broke down the hedge; and the servants of the nobleman arose and were affrighted, and fled; and the enemy destroyed their works, and broke down the olive trees.
52: Now, behold, the nobleman, the lord of the vineyard, called upon his servants, and said unto them, Why! what is the cause of this great evil?
53: Ought ye not to have done even as I commanded you, and—after ye had planted the vineyard, and built the hedge round about, and set watchmen upon the walls thereof—built the tower also, and set a watchman upon the tower, and watched for my vineyard, and not have fallen asleep, lest the enemy should come upon you?

There are so many of the Latter-day Saints today who say, “Well, what need hath my Lord of all this program?” And then like the workers in the vineyard in the story, they become slothful and they do not do the job, and they let the thing slide, and the first things they know the enemy is upon them and comes in and breaks down the work that has been done. 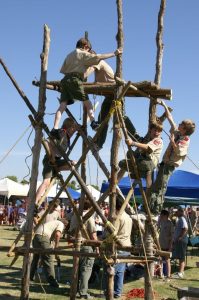 What need hath my Lord of this Scout program? My Lord hath need of the Scout program because it is one means whereby we can make the boys in this Church real Latter-day Saints. We can teach them the meaning of the Scout oath, “On my honor I will do my best to do my duty to God.” That is the challenge we hold out to Scout leaders.
Scouters, we ask you to teach those boys by all that is sacred that they do their best to do their duty to God. That is why this Church wants scouting.

We hope that you will help to stave off that turnover and keep these trained men in their jobs so that they can use their experience year after year and so that they can apply that experience to more productive work, and the more productive they are the more boys they will convert. The Lord expects us to be profitable servants in the vineyard. He expects us to bring forth fruits, and he has said that the tree that does not bring forth fruit shall be hewn down. [Let’s do] all we can to keep trained people the job. Another great obstacle is what already mentioned, a failure to recognize the fact that Scouting is part of the Church program.

If scouting would not make better Latter-day Saints, we would not have scouting in the Church. But because scouting does make boys better Latter-day Saints, we take it into the Church, and it has been adopted by the Church, and there is no more enthusiastic scouter anywhere than the President of the Church. You cannot divorce Church work from scouting. Church work and scouting are identical so far as the scouting program is concerned. When you are building scouting in your boys, you are building the work of God and helping to establish the kingdom here on the earth.

Will you use your influence so that we may have a successful program, a wonderful organization? One of the ways you can help most is to give good Boy Scout men to this program and not take our skilled men to place in other phases where they may not be nearly so efficient. Training is so vitally necessary. I feel that a Scout leader’s job is a technical one. It requires training, education on the part of the leader himself. If he is not well trained lie cannot be as efficient as a man who has the “know-how.”

To add to the words from Elder Mark E. Petersen, I feel that in addition to strong leaders, parents must also be involved to make a successful scouting program. Supportive parents, leaders and role models are what is needed to help keep youth involved in the scouting program and keep them attached to the church for the rest of their lives.

“Scouting brings out the best in each of us” -President Thomas S. Monson

Please support our youth. Help them understand that Scouting is apart of the church. It is the activity arm of the youth program and that if, in any way, did not hold to the true ideals of our church, it would not be apart of our youth program.

Help them find the desire to come to meetings, participate in activities, and be active. We as leaders can only do so much. We can’t do anything without support.

Yours in WWW, Scouting and the Gospel,
John