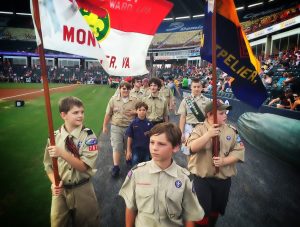 We had a campout a few weeks ago (June 12 & 13) at the Richmond Flying Squirrels Stadium, but that isn’t the real reason we went there. Mike Bradshaw suggested to our troop that we should do the flag ceremony before the game while he sang the national anthem. Our group, including some of our cubs, carried the American flag, State, Council, County, troop, and pack flags onto the field while Bradshaw sang the National Anthem. Which sounded pretty good and was not what I was expecting. After our troop did the flag ceremony, we stayed for the game. It was very fun to stay and watch the game even though a few people left after the ceremony was done. 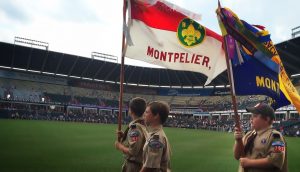 That night at the stadium it was scout night which meant that all scouts including cubs (in other packs) were able to stay and camp out on the field. Sadly there were no spots to put a hammock, but since it was a beautiful night we were able to sleep out under the stars. The next morning we packed our bags and went to krispy kreme and got some donuts for breakfast. Over all it was a very fun experience and we hope that we can do it again. We will be adding a video soon.