We recently had a week-long camping trip at T. Brady Saunders. It was one of the most fun camping trips I’ve ever had. We all had a great time and we also got a lot of merit badges too.

The week started out when we all met at the church in the morning. We had to make sure that we had everyone there and we had to figure out who would be riding in what car. Me and Gavin rode with Brother Bradshaw. Before we left we took a picture and then we were off.

It took about an hour or so to get there. We had to stop at a sports and outdoors place to pick up some stuff for the propane lantern. While we were sitting in their cars we got to here the “wonderful” sound of Charlie singing “Found a Peanut” over the walkie-talkie while we waited.

When we got there we went to the front office to get checked in. We all got red wrist-bands which showed that our campsite was Overstreet. When we got to our campsite we picked out our tents. The tents were raised of the ground and has a wind-proof/water-resistant canvas, wooden floors and two cots. Honestly they gave me one of the best camp sleeping experiences ever.

After we set up camp we had to go to opening flag ceremony in front of the mess hall. There we did a traditional flag ceremony and then we were introduced to the camp’s director: Mic. He gave us the normal welcoming speech and told us about the camp and the rules. After that we had a wonderful lunch cooked by the kitchen staff.

After we all headed out to class. There was a bit of confusion in the coking merit badge class. The camp had accidentally let seventeen people sign-up for cooking instead of eight. The people who got kicked out of cooking were got a free hat and got their money back.

After classes we played ga-ga ball. It’s a really fun game and I got pretty good at it. Here’s a Wikipedia article on it https://en.wikipedia.org/wiki/Ga-ga

That night we had closing flag ceremony and had another good meal. after dinner we did some more ga-ga ball and back at camp we talked a bit about our day and decided to go to the game night at the mess hall and play D&D(Dungeons and Dragons). We spent the entire night making our characters and talking.

After game night it we all went to bed but there was a problem with cold. The night started out fine but then it got cold and everyone was curled up in their sleeping bags trying to keep warm.

Tuesday morning we all woke up well rested even though it was cold that night. It was still cold in the morning but not as cold as it was at night. We all got dressed in our tents and went to opening flag ceremony and had breakfast.

“This is the biggest earthworm I’ve ever seen.”

It turned out that it was a snake and not an earthworm. We all had a good laugh and went off to play Ga-ga.

That night we went to the mess hall again and worked on our D&D characters some more.

When we went to bed it was about the same temperature as the night before and, once again we were all balled up in our sleeping bags.

Wednesday morning was warmer that Tuesday morning but still relatively cold. The routine was the same as all the other days with only a few things out of the ordinary. The first one was at lunch when they gave us these gross lemon flavored raisins. So many people didn’t like them that one kid was collecting them for his collections merit badge class.

The other one happened after Beckette left for CPR certification class. Gavin, Charlie, Brother Foster and me played card games. I utterly lost. We also worked some more on our D&D characters that night.

When we went to bed it was a pretty good temperature through the whole night. That was the first of many warm nights. 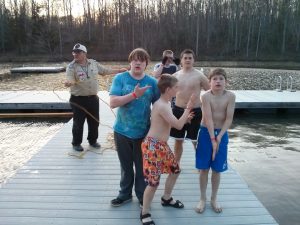 Thursday was a pretty good day(they were all good days) it was pretty normal until after classes. That day we were working on a First Class requirement that required you to pull some one out of the water with a rope to shore. The camp had let us use their lake for this requirement. We knew that the lake wasn’t going to be warm but we didn’t know it was going to be this cold. We all had hilarious reactions but Josh’s was the best by far. When he jumped in you could immediately tell he was surprised by the cold but that was normal. The funny part was when he got out. At first he just stood still and them suddenly screamed,”COLD!” and ran to the end of the pier. Afterwards Bother Foster told us that we could have passed it off on land!

That night we played capture the flag with the other troops in our campsite. It was a lot of fun and the troops got to know each other better.

After capture the flag we played D&D and had a lot of fun.

Before we went to bed the leaders told us to put our gear in the middle of the tent away from the walls because it was going to rain that night. After that we settled down in our cots an went to sleep.

Friday was officially the last day of camp but not for us, we were staying an extra day so we could qualify for OA (Order of the Arrow) elections. It was poring in the morning but thankfully it let down so we could get to breakfast. The day was pretty rushed and cramped together so the day went by pretty fast. After lunch camp officially ended and we had the camp all to ourselves.

After camp ended we had an Easter party of sorts policy of Sister Bradshaw. Brother Bradshaw had set up the troop’s cardboard cutout Sasquatch A.K.A “Squatch” and put bunny glasses on him. We each got a bag full of candy and my personal favorite: a giant chocolate covered homemade peanut butter Easter egg! Afterwards we posed for pictures next to “Squatch” with our Easter candy and Brother Bradshaw even put on the bunny glasses to,”appease the “Wife”.”

We talked and played ga-ga the rest of the afternoon and did some other stuff.

That evening we set up a table by the trading post (the camp store) and John got out 3 boxes of pizza. As expected we ate it all and during dinner were played Werewolf for at least two hours. If you want to know what Werewolf is click on this http://www.games-wiki.org/wiki/Werewolves_of_Millers_Hollow/.

Later that night we played D&D again and once again had a lot of fun. After we finished the leaders told us it was going to rain again that night so we should do the same thing we did last night.

After breakfast it was all business. We got camp cleaned up in about two hours. After that we had to get all our gear into the cars and then it was time to go.

As you know we got back safe and sound but, Brother Bradshaw got lost but he found his way back.

Overall it was a great spring campout and well worth the two cold nights. Well this is John A. signing off.