A few weeks ago (April 10th & 11th) we had a refresher in what it feels like to live in the modern age. That’s right for those of you who guessed it, we slept indoors during a camp-out. A normally sacrilegious practice among our scout leaders, the decision was made that it was more convenient for our time schedule to sleep in one of the house that neighbored our scout activity. On the first day of shoulder tearing enjoyment we played Disk Golf. I would like to point out that it is not called Frisbee golf as many casual players call it but instead Disk Golf. We started at hole one and it became quickly apparent that our skills at Disk Golf, Nay, at Frisbee itself were lacking. Most of the holes we had to beat were at about four par, or we had four shots to pass the hole. On average it took six to seven throws for our adept players and at a max of 16 for our newbies. As we continued we felt each throw in our arms and as the day settled we finished the holes with Gavin, our senior patrol leader, lead at the top of the scoreboard. 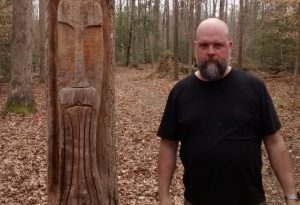 We retired to the “campsite” in which a feast of plenty was made before us. Soon to follow was the normal games that followed a scouting event. Early the next morning, we awake to the call of our assistant scout master. We were rushed outside into the car hoping to make it to the fly fishing event on time. We made it with a little time to spare. Much of the events in the ride there were lost due to my inability to stay awake. At the fly fishing festival our arm strength, finger dexterity, and ecological knowledge were put to the test as we earned our fishing merit badge. I will say that the sheer amount of people there surprised me but, I cannot say that the skill there was lacking. as we ended I ran across a rare treasure that I was able to partake in an in-person demonstration by Lefty Kreh, a world renowned fly fisher, that could out fish some of the best there at the age of 89 with only half a rod. As the cherry on the day we were treated to our hard work with each a half gallon of Slurpee.